Coronations, weddings, intrigue, betrayal, assassination... dive into the official residence of the queen of England and Scotland, and discover the secrets of Holyrood Palace. 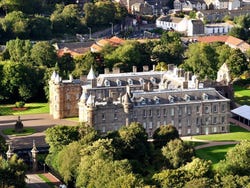 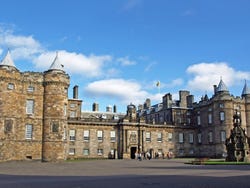 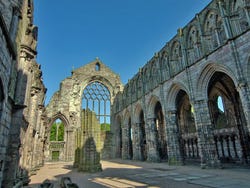 What to expect in the palace?

At the end of the Royal Mile sits Holyroodhouse Palace (better known as Holyrood Palace), a jewel of classical architecture. You'll pass through the sumptuous baroque style halls of the royal residence, looking for the footprints the Scottish monarchs left behind.

You can visit the bedrooms of the palace's most famous resident, Mary Stewart (the most famous Scottish Queen), and during the visit, you're sure to feel a member of royalty as you admire the decorative furniture of the time, as well as magnificent tapestries and royal portraits.

In the royal grounds you can see the ruins of Holyrood Abbey, and wandering between its walls with the sky as the ceiling feel the romance and mystery with which it is still imbued. And neither should you miss the gardens which extend into the land surrounding Arthur's seat.

Along with an audioguide in English (and 8 other languages) by the end of the tour you'll be in no doubt as to why Holyrood is one of the most admired palaces in Scotland.

Holyroodhouse Palace is a functioning royal palace, and as such could be subject to closure for official events.

Audioguide in English and 8 other languages.

Book as soon as possible to guarantee availability, especially during public holidays and festivities.

You will receive an email with your ticket attached which you must print out and show on the day of the activity.

If you still have more questions, check out our section on frequently asked questions. If you need help to book an activity or have any enquiries, please contact us.

Yes (most areas are accessible).

Not refundable. This activity does not permit modifications nor cancelations.

I travelled with teenagers
8

I travelled with teenagers
10

I travelled with teenagers
10

I travelled with friends
10

I travelled with my partner
Show all the reviews
Free

9.2 / 10 288 reviews
Our free tour is the best way to get to know the Edinburgh old town. We'll get to know Grassmarket, the famous Royal Mile or the imposing Edinburgh Castle.
Free!
Book

9.3 / 10 82 reviews
Take in the stunning landscapes of the Scottish Highlands, the Glencoe Valley and the mysterious Loch Ness, with murky secrets lurking in the deep...
US$ 64.30
Book
Free

8.7 / 10 188 reviews
Explore the darkest secrets of Edinburgh and its legendary ghosts on a 1.5-hour free walking tour of the city at nighttime.
Free!
Book