During and shortly after the Scottish Reformation, the cathedral was reformed on numerous occasions to suit the Protestant style of worship. Currently, the temple shows evidence of various periods. The most important restoration took place after the English set the church on fire in 1385. Years later the temple was redesigned in a Gothic style.

Although St Giles' Cathedral is the Church of Scotland's principal place of worship, it is not technically a cathedral as it does not have a bishop.

Inside the Edinburgh Cathedral

The ceiling’s textures and shades of colour are captivating and give the cathedral a charming appearance. It also testifies to the multiple reformations throughout the centuries.

Although the cathedral was originally built in the shape of a cross, the later construction of the lateral chapels hides this form.

The most noteworthy part of the church is its magnificent stained-glass windows which flood the cathedral in a pleasant light. These were put in place during the nineteenth century.

In the central nave stands a statue of John Knox, the Protestant leader during the Reformation who became the first minister at St Giles in 1559.

On the south-east corner of the Edinburgh Cathedral visitors will find the Thistle Chapel, one of the most important parts of the church. It was ordered by an order of Chivalry, the Order of the Thistle between 1909 and 1911. This is an elegant little chapel built in a peculiar Gothic style.

Small angels playing various instruments are located around the ceiling of the Thistle Chapel, with one of them, naturally, playing the bagpipes. 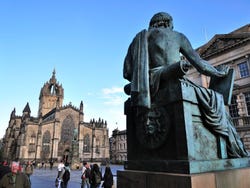 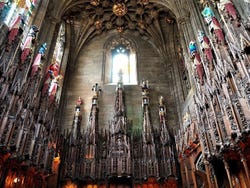 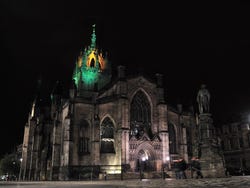 Free entry. Visitors are invited to make a donation.
Permits for photography: £ 2 (US$ 2.50)