Edinburgh’s growing popularity and the increase of low-cost airlines have made this destination accessible to everyone.

Travelling from the U.S.

Visitors from the United States will find direct flights to Edinburgh from the following North American cities:

Canadian tourists will be able to travel non-stop from Toronto (Toronto Pearson International Airport) to Edinburgh with Air Canada rouge.

There is a large range of low-cost airlines that fly from numerous destinations including Spain, France, Italy, Ireland, Germany, Belgium and many more countries.

The most popular low-cost carriers include Easyjet, Jet2, Ryanair, FlyBe and Norwegian.

To find the best deals check out our search engine, where you will be able to search and compare flights and airline companies:

Once you have your flights booked, check out our article on the best ways to get to the city centre:

Edinburgh Airport is Scotland's most important airport. Find out how to get to the centre of Edinburgh from the airport and back & more useful information.

If you live or are visiting nearby cities such as Glasgow, Liverpool, Newcastle or Manchester, the easiest and most comfortable way of getting to Edinburgh is by train. From further away destinations, flying is normally the cheapest and fastest option. For more information on the trains available, check out the official National Rail website: 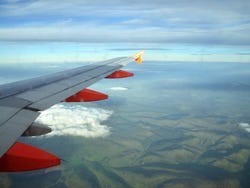 View of Scotland from the plane 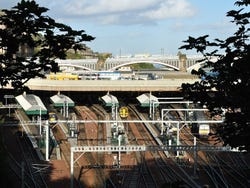