Princes Street Gardens is one of the most important urban parks situated in the heart of Edinburgh. It separates the Old Town from the New Town.

The gardens are over 37 acres (150.000 m²) and are divided into two parts by The Mound, an artificial hill that connects Edinburgh’s New Town and Old Town and where the Scottish National Gallery is located.

Princes Street Gardens was created by draining Edinburgh’s largest loch, the Nor Loch.

Nor Loch, which was first a marshland on the north side of Edinburgh had initially been used as a natural Medieval defence along with Edinburgh Castle. With the north and west parts of the town protected, Edinburgh only needed a fortification on the east and south side of the city.

From the Middle Ages until the nineteenth century, it is believed that the Nor Loch was where “witch ducking” would take place (this was a way of discovering if a suspect was guilty of witchcraft), an ideal place to make dead bodies disappear, where water waste was thrown out and some historians  believe that despite this many citizens would even go to the Loch for fresh water.

Princes Street Gardens were designed first in the 1770s but were inaugurated in 1820 when the lake was completely drained.

Beautiful all year round

The Gardens are beautiful all year round. It is where many locals meet up, especially at the Ross Fountain, the park's most important monument. This cast iron structure was installed in 1872 after having been an exhibit at the Great Exhibition of 1862 in London.

Every year at Christmas, part of the Gardens is transformed into the “Winter Wonderland” with a Christmas Market, an ice rink and many other fun attractions, including a Ferris wheel that stands 108 ft (33m) tall, often called The Edinburgh Eye. 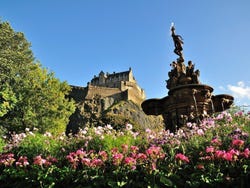 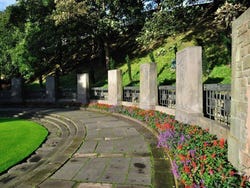 Monuments in the Princes Street Gardens 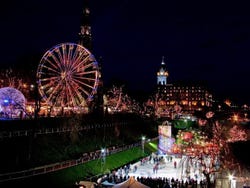 Between the Old Town and the New Town