Built into the pavement on the Esplanade (near the Cathedral) is a heart-shaped mosaic made of coloured granite cobblestones. It marks where the old Edinburgh prison once stood founded during the fifteenth century and demolished in 1817. This name has been adopted by one of Edinburgh's two football clubs, Heart of Midlothian Football Club, who use the mosaic itself as the basis of their logo.

Tourists and locals spit inside the heart for good luck; therefore, be careful where you walk and be sure to step next to the heart and not in it, otherwise you might slip and fall.

All the benches have owners

If you walk around the city centre and explore Edinburgh’s parks, you will notice that all the benches have small inscriptions on them. These benches are called “memorial benches” and are normally bought by families and friends of a person who has passed away to honour and commemorate them by engraving their names and a putting a dedication on the back of the bench.

This custom is also used in other parts of the UK.

The Royal Mile connects with numerous little and narrow alleyways called “Closes” in Scots. The dark and sometimes sinister passageways lead to “courts” or interior patios and many tell sad and sordid stories.

The city of Edinburgh was once made up of 300 closes, of which only 60 have survived. One of the best preserved closes is the Mary King’s Close. Visitors can book a visit to The Real Mary King’s Close and discover how many of Edinburgh’s poorest families lived and died in extreme poverty and sadness.

For the citizens of Edinburgh thousands of years ago, the “world ended” at the bottom of High Street where it crosses with St Mary’s Street. Centuries ago, the wall built to defend the Old Town from the English went through this exact location. Since very few inhabitants dared leave the Old Town and cross the fortified walls, this part was known as “The World’s End”.

Today a golden plaque points out where the city ended exactly and just in front is one of the best-known pubs in Edinburgh called "The World's End".

The North Bridge that hangs over Waverley railway station links the Old Town to the New Town, but sadly it has become famous over the years because many people have jumped off the overpass, taking their own lives.

After numerous attempts to try and prevent people from jumping off the bridge, the City has placed a plaque with the telephone number for the Samaritans in case someone needs to talk to someone in his or her moments of despair.

Several centuries ago Edinburgh was a very dark and foggy city because of all the fires and chimneys it had, hence why sometimes the city is still fondly known as “Auld Reekie”, reek being British slang for a bad smell, as the sewage mixed with the smoke smell.

Even though lighting a fire in the city’s townhouses is presently forbidden, the buildings still preserve their original chimneys, which is very curious to see.

When Microsoft decided to move its Scotland headquarters to the centre of Edinburgh, they had planned to build a brand new and very modern office. However, the City denied them the necessary building permit claiming that the building would stand out too much in this part of town. So Microsoft decided to buy a classic Victorian building at the Waverley Gate Building in Waterloo Place, leave the façade intact and reform its interior completely, transforming it into an extremely modern office as they had previously planned, but blending perfectly with the other buildings. If you walk past, glance inside to see how it looks inside. 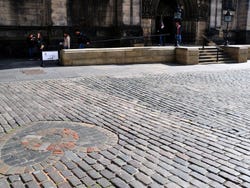 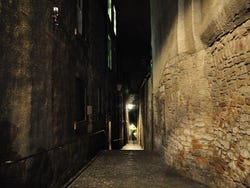 Close on the Royal Mile 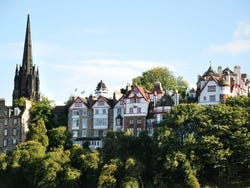 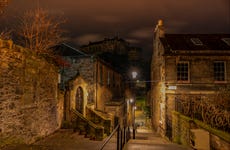