Located beside the Palace of Holyroodhouse and built in 2004, the new Scottish Parliament building represents the recovery of the legislative power by the Scots after three centuries of union with the United Kingdom.

The new Scottish Parliament building was opened on 7 September 2004 after over five years of construction. The Parliament was designed by the Spanish architect, Enric Millares who died four years before it was inaugurated.

The creation was criticised for numerous reasons, principally because its final cost was ten times higher than initial estimates. Another aspect which displeased many citizens, media and politicians was the modern design of the building, making it stand out on the Royal Mile.

Depending on when you go, it is sometimes possible to get a guided tour of the building or attend Parliament debates from the public gallery of the Debating Chamber.

A guided tour of the Parliament is available from Monday to Saturday in the morning (from 10:30 am to 12 noon) and in the afternoon (2 pm – 3 pm). During this guided tour, you will visit the Debating Chamber, the dramatic vaults of the Main Hall and other interesting rooms. If you are interested, we recommend booking in advance on the Scottish Parliament official website because tours are subject to availability.

If you have enough time

Although the Scottish Parliament building is free and unique, we recommend only visiting this attraction if you have enough time and have seen Edinburgh's top monuments and attractions first. 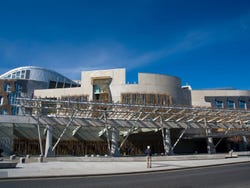 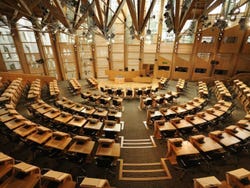 The Debating Chamber of the Scottish Parliament
2See photo gallery

Horse Wynd, at the foot of the Royal Mile