With over 12 million passengers a year, Edinburgh Airport is Scotland’s most important international airport and one of the busiest airports of the United Kingdom.

The current airport substituted the Turnhouse Aerodrome, an air defence base built in 1915 and used during World War I and World War II. After the end of the Second World War, the runway was extended and the first terminal for commercial use was built.

Since Edinburgh has become such a popular city in recent years, Edinburgh Airport is being expanded and modernised in various stages. In 2005 a new control tower was inaugurated and the terminal building is also being enlarged.

How to get to Edinburgh city from the Airport

The easiest and most hassle-free ways to get to the city centre from the airport are the following:

The Lothian bus number 35 also connects the city centre with the airport but stops at local destinations during the ride. After reaching the centre, it continues to Leith.

If you book a private airport transfer service, the chauffeur will be waiting for you at the arrival terminal with a sign with your name on it. This is the fastest and most comfortable way of getting to your hotel. You can book a four passenger car for just £ 40 (US$ 49.50) or an eight-seater for £ 45 (US$ 55.70). 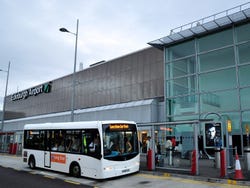 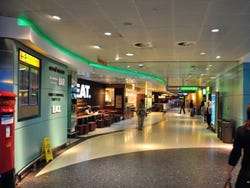 8 miles to the East of the city.

Getting to Edinburgh Getting around Edinburgh