Imposing castles, grand palaces and mythical mansions: discover Scotland from a new perspective exploring the filming locations of legendary TV series The Outlander on this tour from Edinburgh. 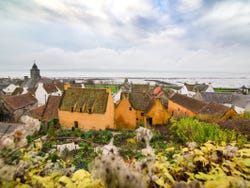 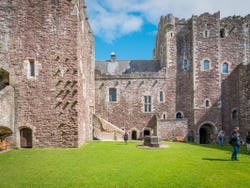 On the morning of your tour, you'll be picked up from the meeting point in the heart of Edinburgh, ready for a day exploring the filming locations of The Outlander. Leave the city behind and head deep into the Scottish countryside, embracing the scenery which inspired the historical time travel TV show. The first stop on your tour will be Midhope Castle, where you'll stop to take photos of the site known as "Lallybroch Castle" in the series.

Next, you'll continue on to Blackness Castle. Explore this magnificent 15th century castle and admire the views from the striking ship-like fortifications over the Firth of Forth, before heading to the next stop on the tour, the Royal Burgh of Linlithgow. You'll have the opportunity here to visit Linlithgow Palace. Ironically built as a relaxing royal retreat, these imposing ruins act as "Wentworth Prison" in the TV series!

The Outlander Tour of Scotland will then take you to Callendar House, a stately home which dates back to the 14th century. After admiring the elegant chateau-style mansion and visiting its famous kitchen, you'll head on to the Royal Burgh of Culross. Strolling through the cobblestone streets of this picturesque village, you'll feel as though you've stepped straight into 17th century Scotland.

The last stop on your tour will be at Hoptoun House, a majestic stately home set in beautiful grounds. You'll have time here to tour the house, or to wander through the country estate and deer park, before returning to Edinburgh, where your day trip will come to an end.

View complete description
US$ 68.10
No hidden fees or surcharges
Free cancellation up to 24 hours before the service starts
Book

Free! Free cancellation up to 24 hours before the activity starts. If you cancel under this time or do not show up, you will not be refunded.

9.30 / 10 332 reviews
Our free tour is the best way to get to know the Edinburgh old town. We'll get to know Grassmarket, the famous Royal Mile or the imposing Edinburgh Castle.
Free!
Book
like

9.40 / 10 203 reviews
Coronations, weddings, betrayal, assassination... discover the secrets of Holyrood Palace: the official residence of the queen of England and Scotland.
US$ 22.90
Book
like

9.30 / 10 99 reviews
Take in the stunning landscapes of the Scottish Highlands, the Glencoe Valley and the mysterious Loch Ness, with murky secrets lurking in the deep...
US$ 69.60
Book