It is no coincidence that in Edinburgh you can take a course in Parapsychology. The Scottish capital is famously haunted and there have been countless sightings of ghosts and phantoms. 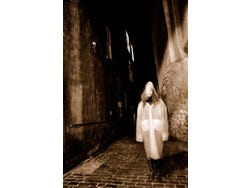 Wars, murders, witch burnings, and many other gruesome periods throughout Edinburgh's history have made it a notoriously haunted city.

This walking tour will begin on Edinburgh's High Street (Royal Mile) and will take you away from the traditional routes through the city and into the dark corners which hide Edinburgh's most sinister secrets.

During the tour, we will reveal all the spooky stories:

All of our providers comply with local legislation and applicable health recommendations to avoid the spread of Covid-19.

The activity takes place with a guide that speaks in English.

You can book up until 18 hours before the activity as long as there are still places. Book now to guarantee your spot.

Electronic. Show the voucher on your phone.

All services published on Civitatis are carried out in accordance with our Sustainability Code.

No printing of documentation required.

If you have any other questions please contact us.

US$ 20.50
No hidden fees or surcharges
Free cancellation up to 6 hours before the service starts
Book

Free! Free cancellation up to 6 hours before the activity starts. If you cancel under this time or do not show up, you will not be refunded.

130 High Street (Royal Mile), at the corner of Stevenlaw's Close

These are genuine reviews written by our customers.

I travelled with teenagers
Show all the reviews
like

9.30 / 10 372 reviews
Our free tour is the best way to get to know the Edinburgh old town. We'll get to know Grassmarket, the famous Royal Mile or the imposing Edinburgh Castle.
Free!
Book
like

9.30 / 10 105 reviews
Take in the stunning landscapes of the Scottish Highlands, the Glencoe Valley and the mysterious Loch Ness, with murky secrets lurking in the deep...
US$ 68.30
Book
like

Tickets to the Royal Yacht Britannia

9.80 / 10 23 reviews
Want to climb on board the British Royal Familiy's yacht? See one of the most visited tourist attractions in the U.K.: the Royal Yacht Britannia.
US$ 23.20
Book